General Mills and I spoke via phone on August 13th. Here are some of the positives…

Note: I offered to help facilitate this process by reaching out to my contacts that supply pure oats to manufacturers. General Mills accepted this offer. Three suppliers were contacted this morning.

Update: As of 8/27/15 email correspondence with General Mills on whether they were truly interested in purchasing pure oats for Cheerios, they responded that, “It is not accurate to say that General Mills is not interested in purchasing pure oats for gluten free Cheerios and other products” and “at this time you should not have any expectation that Cheerios will be moving to a purity protocol.”

All of the above is great news and will lead to a safer product in my opinion. The less barley in the oats to begin with, the less barley there will be in the final product.

Here are some of the not-so-positives (in my opinion)…

Why this bothers me: When I visited General Mills I was shown extraction values for some of the lots of yellow box Cheerios produced during the gluten-free validation phase (these Cheerios did NOT go into boxes labeled gluten-free). One extraction from one of the lots was above 90 parts per million of gluten. Because the other extraction values were so low, the lot mean was somewhere in the range of 10 to 13 ppm gluten. In my opinion if test results on a composite sample include values at or above 20 ppm gluten the reason for this should be explored via additional testing. A high test result should not be discounted because the lot mean is below 20 ppm gluten.

In my opinion, General Mills should switch to the R7001 assay that has a lower limit of quantification of 5 ppm. This would help facilitate accuracy of the lot means.

Gluten Free Watchdog Position Statement on Cheerios: Based on the totality of information provided to GFWD, it is our position at this time that individuals with celiac disease should not eat gluten-free Cheerios. Before Gluten Free Watchdog can feel comfortable with this product, General Mills must take steps to ensure that Cheerios are not contaminated with barley (apparently the most problematic grain when it comes to mechanically “cleaning” oats). General Mills must demonstrate via repeated testing of individual boxes of Cheerios using the Ridascreen Gliadin R7001 assay that boxes of Cheerios consistently and reliably test below 20 parts per million of gluten.

Future Discussions with General Mills: General Mills and I have a call scheduled for Thursday, August 13th. General Mills stated to me in email correspondence “We have been working on updates in your 3 areas of concern (oats sourcing, 7002 vs 7001 kit, and composite vs individual lot testing) since your visit, and would like to use this call as a time to update you on some of the progress we’ve made.”

I will continue to update the gluten-free community.

Gluten Free Watchdog is in the process of purchasing Yellow Box Gluten-Free Cheerios for testing.

*There are differences in protocols followed by various suppliers of gluten-free oats but they all begin with pure oat seed. Please see the end of this post for a few of the protocols used to produce gluten-free oats.

General Mills has four plants producing gluten-free Cheerios using what they term “validated gluten-free flour.” At the time of my visit to General Mills (July 14 to 16) they had 88 production dates or “lots” of testing data. Each data point represents a “lot mean.”

Lot means: According to General Mills lot means for Yellow Box Cheerios (finished product) are between 10 and 13 parts per million of gluten.

This section of the post was shared with General Mills prior to publication. They inserted the following statement to the above paragraph “This data represents product produced prior to General Mills applying their ‘Gluten-Free’ labeling to the packaging, having been collected during their ‘validation’ period.”

This is new-to-me information from General Mills. At the time of my visit, I was under the impression that the data being shared was for boxes of Cheerios labeled gluten-free.

My opinion on the test results

In my opinion some of the test results indicate a potential problem (e.g., some extraction values from some lots are above 20 parts per million of gluten). Despite the efforts to mechanically “clean” the oats and the checks and balances in place to make sure wheat and barley have been effectively removed (including manual checking of random draws of oats) some gluten (likely from barley) is ending up in Cheerios.

Based on extraction values shared with me I am not fully confident that every box of Yellow Box Cheerios from the 88 lots produced at the time of my visit to General Mills contains a level of gluten less than 20 parts per million.

Why am I not fully confident? Based on the information shared with me, General Mills is testing final product Cheerios via a mixture of samples taken from 12 to 18 boxes. Any contamination in a composite sample is likely diluted. In other words, IF 11 boxes contain well below 20 parts per million of gluten and only 1 box contains above 20 parts per million of gluten, combining the boxes will cause the contamination from the one box to be “diluted.” It also is impossible to know the source box(s) of contamination.

In email correspondence I asked General Mills if they were basing their decision on the safety of a “lot” of boxed Cheerios on the lot mean or whether individual extractions above 20 parts per million of gluten raised alarm bells.

Their response: “With all the learning we have done on our journey to bring gluten-free Cheerios to market, we know that looking only at a single data point does not represent the entire picture. As we shared with you, we conduct a minimum of 12 tests on any given sample of Cheerios. In doing so, we look first at the lot mean to give us an initial indication of safety. However, we also look at the confidence interval around the lot mean to tell us about the variability of the individual extractions. It is through a thorough assessment of all the data, we can have confidence around the safety of any given sample or lot.”

According to General Mills, their lab (Medallion Labs) is using the Ridascreen Fast Gliadin R7002 with cocktail extraction to test for gluten levels in finished product Cheerios.

Note: The R7002 assay is not the same assay as the fully validated Ridascreen Gliadin R7001 used by Gluten Free Watchdog.

My opinion on the testing assay

Medallion Labs is reporting precise extraction values when they fall below the LLOQ versus the typical reporting practice of “less than 10 ppm.” Reported values below the LLOQ are not necessarily accurate. While these results are for internal purposes only they are being used to determine a lot mean.

General Mills stated the following in email correspondence regarding their use of the R7002 assay when the issues mentioned above (e.g., decreasing incubation times and resulting increases in variability) were presented to them:

“As we stated in our discussion last week, we are aware of the differences in the two kits, including the validation status. At this point we’re confident that we can achieve accurate results by applying the R-Biopharm cocktail solution to our extraction step with the 7002 kit and reviewing our n=12 data sets. The other differences you cite could allow the 7001 kit to achieve the lower limit of quantitation and perhaps lower variability. As we discussed, we will be looking at an internal kit-to-kit comparison, resources permitting. Our experiments show the majority of variability in gluten measurement in oat-based samples, is related to the difficulty in getting a homogenous sample despite our efforts on lab grinding techniques. In the meantime, we are applying the statistical treatment we showed you in order to verify the accuracy of lot means used by the project team to make decisions.”

In my opinion General Mills should:

Suppliers (i.e., those dealing directly with the growers) of Oats Grown under a Gluten-Free Protocol (not a complete list)

Farm certified gluten-free oats should be available by October. Please read about the protocol HERE. 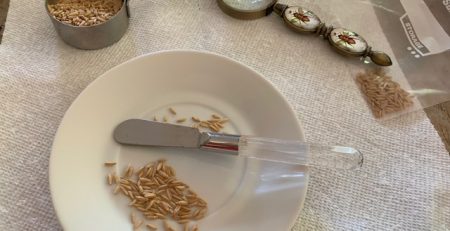 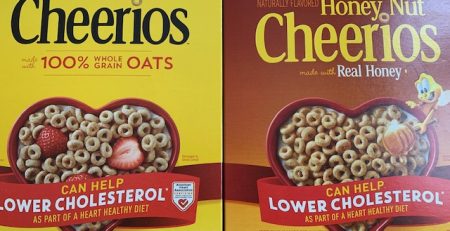