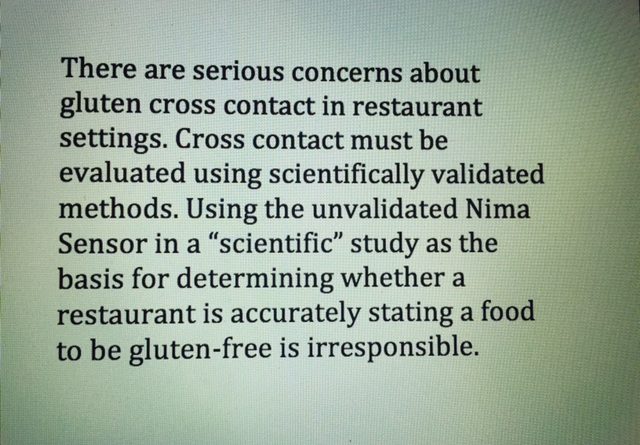 Yesterday evening I was just about to close up shop when three messages arrived almost simultaneously asking about a research abstract presented at the American College of Gastroenterology annual meeting entitled “Gluten Contamination of Restaurant Food: Analysis of Crowd-Sourced Data.” According to the abstract, study authors, including physicians from the Celiac Disease Center at Columbia University “analyzed data from a portable gluten detection device (Nima), collected across the USA during an 18-month period by users (n = 804) who opted to share results of their point-of-care tests.” One of the attention grabbing statements in the abstract reads, “One-third of restaurant foods labeled GF contained at least 20 ppm of gluten.” The entire abstract is available at https://www.eventscribe.com/2018/ACG/fsPopup.asp?Mode=presInfo&PresentationID=442112

Okay, so what’s the problem with this abstract?

Under the FDA’s gluten-free labeling rule for packaged foods, “gluten-free” means a level of gluten below 20 ppm. It does not mean zero gluten. Folks can disagree with FDA on what gluten-free should mean but detecting some level of gluten is very different than quantifying gluten at a level of gluten at or above 20 ppm. Details matter especially in research abstracts presented at medical conferences. For more information see https://www.glutenfreewatchdog.org/news/gluten-free-watchdogs-updated-position-statement-on-the-nima-sensor-for-gluten/

“In our opinion, use of the Nima device will protect the health of gluten-sensitive consumers, if properly used on foods with reasonably uniform gluten distribution. The Nima device did perform poorly in detection of the critical 20 ppm on certain categories of foods, including bread, pasta, and corn puffs (47% detection).” The full evaluation is available at http://jfoodprotection.org/doi/pdf/10.4315/0362-028X.JFP-18-184

“The sample volume taken into the Nima device is a small pea-sized portion. Based upon the results, the small sample provides reliable results when the gluten is well distributed in the tested food. However, the presence of gluten-containing particulates could be missed with this sampling device. The sampling problem with particulates is a key issue with the Nima device. Consumers would need to take multiple samples to increase reliability when particulates are suspected.”

There are serious concerns about gluten cross contact in restaurant settings. Cross contact must be evaluated using scientifically validated methods. Using the unvalidated Nima Sensor in a “scientific” study as the basis for determining whether a restaurant is accurately stating a food to be gluten-free is irresponsible.

*Here is what the FDA has to say about scientifically valid methods for the purposes of evaluating a gluten-free claim, “a scientifically valid method for purposes of substantiating a ‘‘gluten-free” claim for foods matrices where formally validated methods (e.g., that underwent a multi-laboratory performance evaluation) do not exist is one that is accurate, precise, and specific for its intended purpose and where the results of the method evaluation are published in the peer reviewed scientific literature. In other words, a scientifically valid test is one that consistently and reliably does what it is intended to do.” Source: Gluten-Free Labeling of Foods: Final Rule https://www.gpo.gov/fdsys/pkg/FR-2013-08-05/pdf/2013-18813.pdf

“In the enforcement of its regulations, FDA routinely uses scientifically valid methods that have undergone an independent multi-laboratory performance evaluation where the results have been published in the peer-reviewed scientific literature to ensure that the results obtained are accurate and reliable. Source: Questions and Answers: Gluten-Free Food Labeling Final Rule https://www.fda.gov/Food/GuidanceRegulation/GuidanceDocumentsRegulatoryInformation/Allergens/ucm362880.htm