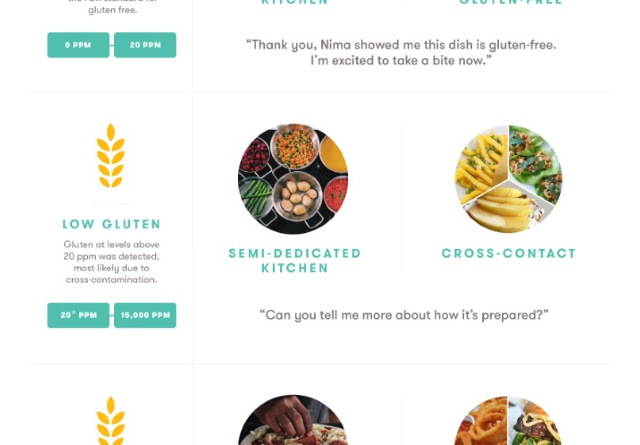 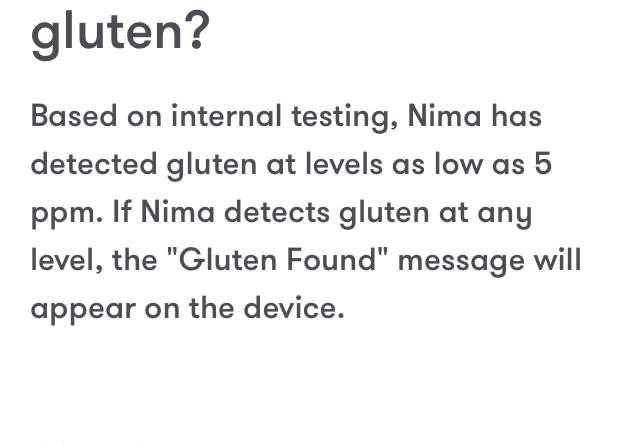 Bottom Line: In some cases packaged food labeled gluten-free (or appearing to be free of gluten containing ingredients) testing “low gluten” using the Nima may test below the lower limit of quantification of 5 parts per million of gluten (and below the limit of detection of 1 ppm) using the fully validated R5 ELISA Mendez Method (Ridascreen Gliadin R7001).

Comparison Testing: Results comparing the Nima to the R5 ELISA included in this summary report are for the same product. In other words either a consumer or Gluten Free Watchdog tested a pea size amount of a product with the Nima and the remaining sample was sent to the lab for testing.

Note: Five products testing “low gluten” using Nima were available for further testing with the R5 ELISA. These 5 products were tested at Bia Diagnostics. Gluten Free Watchdog will continue to send packaged products labeled gluten-free testing low gluten to the lab for follow-up testing. This post will be updated when there is additional information.

Information on the meaning of low gluten: The Nima website states, “Gluten Detected / Low – Traces of gluten were found in your sample. This could be from cross-contamination or from an ingredient in the food. With this reading, there is at least 5 ppm and as much as 15,000 ppm , which is equivalent to 1.5% gluten in this sample.”

Note: On the same Nima webpage the following conflicting information also is provided in a graphic (see screenshot), “Low Gluten. Gluten at levels above 20 ppm was detected, most likely due to cross contamination. 20 ppm — 15,000 ppm. Nima may, on rare occasions, detect below 20 ppm.”

Why might products testing below 5 parts per million of gluten (and sometimes below the limit of detection of 1 ppm) test “low gluten” using Nima?

We don’t know. It may be all, some, or none of the possibilities listed below.

The Nima Sensor may not be well “tuned” to the 20 ppm level. The Nima website states, “Internal testing shows Nima to be sensitive at 20 ppm for a sample of commonly tested foods. Nima is not a quantitative test but Nima has been tuned to detect at the 20 ppm range.”

The Nima Sensor may have a lower limit of detection than what is stated on their website (see screenshot). The Nima website states, “Based on internal testing, Nima has detected gluten at levels as low as 5 ppm.” The Nima website also states that it is “rare” for the sensor to detect gluten below 20 ppm.

Matrix effects. The composition of the food sample may cause a false positive (i.e., low gluten) result when tested with the Nima.

Cross-reactivity. A component of the product may be cross-reacting with the antibody used by the Nima causing a false positive result (i.e., low gluten).

User “error.” For example, the Nima website provides a number of supplemental instructions for testing certain types of foods. Users of this device may not be aware of this information. In addition, gluten from the “environment” such as from unwashed hands may make its way into the capsule.

Consumers, when deciding whether to publicly release “low gluten” results for packaged food products labeled gluten-free, you may want to consider the testing data provided in this post. You also may want to contact both the manufacturer and the Nima team to discuss your findings.

Manufacturers, if you are contacted by a consumer about a product testing “low gluten” using the Nima, you may want to consider asking the consumer to package the remaining product and send it to a third party lab for testing using a fully validated assay (at your expense).

Nima team, if you haven’t already done so, you may want to consider taking a close look at the ingredients in all packaged foods labeled gluten-free testing “low gluten” to see if there are any similarities or patterns. Gluten Free Watchdog is happy to help with this endeavor.

Gluten Free Watchdog is continuing to evaluate the Nima. Another report will post soon.