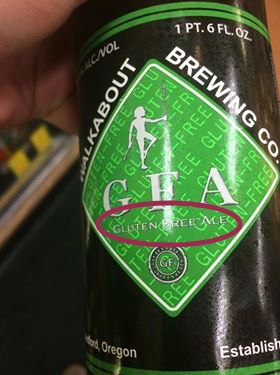 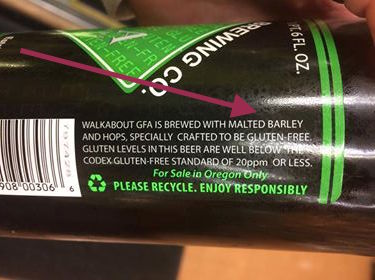 A consumer recently contacted Gluten Free Watchdog about Walkabout GFA (gluten-free ale) from Walkabout Brewing Co. The beer is labeled gluten-free and includes the following statement on the label, “Walkabout GFA is brewed with malted barley and hops specially crafted to be gluten-free.”

Consumer question: Is this legal?

Answer: Yes, in the state of Oregon (this product is also labeled, “for sale in Oregon only”).

Bottom Line: The TTB regulates malt beverages made using both malted barley and hops (e.g., what we think of as “regular” beer). Malt beverages under the jurisdiction of the TTB can’t be labeled gluten-free. They can be labeled “processed to remove gluten” as long as one of the following statement is included on the label:

Caveat: The Federal Alcohol Administration Act (FAA Act) generally requires a prior certificate of label approval before beverages under its jurisdiction can be sold across state lines. IF a product is brewed and sold in the same state, this Act may not apply. For malt beverages this Act also may not apply if the laws of the state to which the beverage is being shipped do not require a prior certificate of labeling approval from the TTB.

So… this is why, if you live in Oregon, you may come across certain brands of beer made from barley malt that are labeled gluten-free.

Specifically, I have been told by the TTB that, “Under the FAA Act, States have the authority not to require Federal approval regarding the labeling of malt beverages that are sold within that State.”

Yes, it is confusing, especially for consumers who do not have the time to personally figure out the intricacies of this issue. It would be far less confusing if brewers followed the labeling and advertising policies of the TTB regardless of where their beer is sold.

FOR FOOD MANUFACTURERS: SOME HELPFUL INFORMATION ABOUT INGREDIENTS CONTAINING GLUTEN

During this period of food shortages and supply disruptions as a result of COVID-19,…