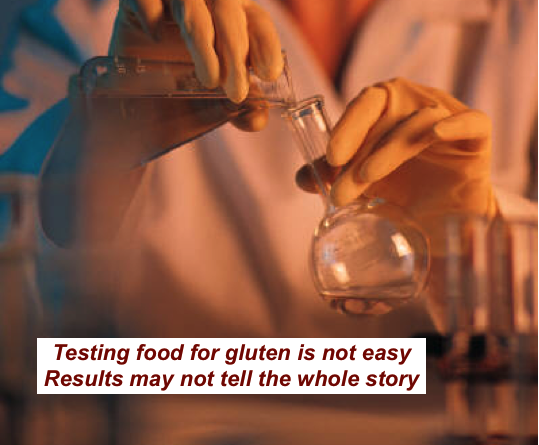 The rule is available at

Currently (and according to FDA), it is next to impossible to accurately test food for gluten when it has been partially broken down into smaller protein fragments during certain processing procedures, such as fermentation and hydrolysis.

Note: At Gluten Free Watchdog, we test foods that could possibly contain fermented or hydrolyzed gluten with the competitive R5 ELISA. If gluten is detected, this is cause for concern. If gluten fragments are not detected, it is not possible to know if this result is a false negative.

Question: Why can’t the sandwich R5 ELISA be used to accurately assess food for the presence of hydrolyzed gluten?

Answer: Hydrolysis may result in gluten peptide fragments that do not contain the two QQPFP epitopes necessary for the sandwich R5 ELISA to work.

If a soy sauce containing hydrolyzed wheat protein tests negative for gluten, this doesn’t mean the product is free of gluten protein.

If a malt vinegar tests negative for gluten, this doesn’t mean the product is free of gluten protein.

If a malt beverage (e.g., beer) tests negative for gluten, this doesn’t mean the product is free of gluten protein.

All the test results may mean, is that the assay used to test the soy sauce, malt vinegar, or beer isn’t capable of detecting the gluten protein fragments present in the product.