Background: As many of you know, Gluten Free Watchdog has been independently testing, assessing, and writing about the Nima Sensor for gluten for a couple of years. Third party testing data was recently released. As a result, we provided an update to our position statement on the testing gadget* (we are not able to recommend it).

In our post we included the following statement from Adrian Rogers, Senior Research Scientist at Romer Labs about the Nima Sensor and the third party testing data, “It could be argued that the device is not fit for purpose as the company states that there is a clear differentiation between safe and unsafe products based on a 20 ppm level which the validation data does not corroborate.”

Celiac.com response: The response to GFWD’s post on the part of celiac.com, a site on which Nima Labs, Inc. is a paid advertiser, defies words. Long story short, the author of the post, Jefferson Adams, calls into question whether Adrian is an expert qualified to comment on the veracity of the gadget and the third party testing data.

Adrian Rogers: Here are just a few of Adrian’s projects and publications in the peer-reviewed scientific literature:

Reasonable folks can disagree: As GFWD has stated time and time again, reasonable folks can disagree, even when they are looking at the same data. This happens in scientific circles all the time. Arguments may become heated but personal attacks intended to malign another scientist’s credibility rarely (if ever) occur. Yes, scientists may publicly disagree with each other but this disagreement is done by presenting alternative views and backing up these views with their interpretation of the science. This is actually how science moves forward.

Bottom line: Personal attacks are never appropriate in scientific circles. Nima Labs, Inc. should consider removing their advertising from celiac.com and any other site that stoops to personal attacks on scientists who speak out about the limitations of the gluten and peanut sensors.

Consumer testing gadgets are new to the marketplace. They will improve only if the gadget manufacturers take into account all of the constructive criticism coming their way by folks who are most definitely qualified to offer it.

*The Nima Sensor for gluten does not appear to meet current FDA requirements for medical device designation. Therefore it is referred to here as a “gadget” to prevent confusion.

The screenshot posted below is from a webinar on recently released third party data presented by Nima Labs and available at:

The R5 ELISA included in the table below is from Neogen. It is NOT the scientifically validated Ridascreen Gliadin R5 ELISA Mendez Method from R-Biopharm used by Gluten Free Watchdog. 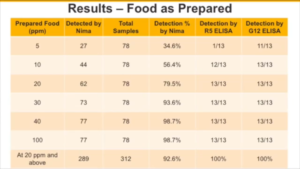