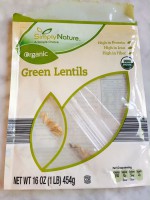 The following report on Aldi Simply Nature Lentils (foreign grain) will inform you of the amount of gluten found in this product during testing.

The ingredients are listed as: organic green lentils.

The consumer sent photos of the grain to Aldi and Gluten Free Watchdog. According to Aldi's supplier, the grains in the photos are wild oats.

Because of the discrepancy between the supplier’s opinion and the farmer’s opinion, Gluten Free Watchdog requested that the consumer send us the foreign grain so that we could have the lab test it and establish the presence (or lack thereof) of gluten-containing grains.

Only the foreign grain was tested. Lentils were not available for testing.