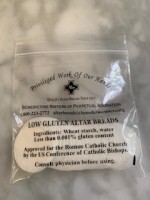 The following report on Benedictine Sisters Low Gluten Communion Bread will inform you of the amount of gluten found in this product during testing.

Gluten-free information on product packaging: This product is not labeled gluten-free. Label reads, “Less than 0.001% gluten content” and “Approved for the Roman Catholic Church by the US Conference of Catholic Bishops.”

Note: The testing of this product has been done at the request of multiple subscribers. It is not meant to be disrespectful to the Benedictine Sisters who are providing a tremendous service to individuals with celiac disease and gluten-related disorders in the Catholic community by providing these low gluten altar breads which conform to Canon Law.

Ingredient and labeling information provided as a convenience only. Do not rely on this information for your dietary needs. Always read product labels before purchasing for the most accurate and up-to-date information.
This is a sample report, available to subscribers and non-subscribers alike.

Please read the entire summary. This is a lot to take in and understand.

The mean gluten level of the two extractions tested is 52 parts per million using the sandwich R5 ELISA. The sandwich ELISA quantifies intact gluten. These results are consistent with the results of previous testing done in 2014.

Using the competitive R5 ELISA (used to detect gluten that has been partially broken down), the six extractions tested between < 10 ppm and 23 ppm gluten.

While the results using the sandwich ELISA may seem alarming, it is important to remember what is meant by parts per million. It is a proportion—how many parts out of one million parts contain the contaminant (gluten). It is the same as milligrams per kilogram because one kilogram equals one million milligrams. If a product contains 20 parts per million of gluten, you would have to eat one kilogram (2.2 pounds) of product to eat 20 milligrams of gluten. In other words, the amount of product eaten is important.

Regarding the low gluten hosts, please keep in mind that we are talking about a wafer that weighs approximately 33 milligrams (as weighed in 2014). As a result, the amount of gluten in one host is approximately 0.0017 milligrams.

In other words, the amount of gluten is far greater in a one-ounce slice of gluten-free bread containing a level of gluten of 5 ppm than what is found in a single low gluten altar bread. This is because the amount of product eaten is greater.

1. This product was tested with the competitive R5 ELISA per the recommendation of the assay manufacturer R-Biopharm. According to the Prolamin Working Group, wheat starch can be partially broken down during processing.

2. Test results on this product are atypical. GFWD has never before seen the results of the competitive ELISA come in at lower levels than the sandwich ELISA. Results were confirmed with follow-up testing.