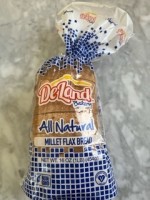 The following report on Deland All Natural Millet Bread (Not Labeled GF) will inform you of the amount of gluten found in this product during testing.

Gluten-free information on product packaging: This product is not labeled gluten-free.

Note: Gluten Free Watchdog reached out to Deland Bakery asking about their creative labeling. We were told the following in email correspondence:

“Our all natural millet bread is not made in a dedicated gluten free facility and cannot be considered gluten free. It is made with the same machines as our organic bread which does have wheat and yeast. The mother dough used to make the All Natural line has a small amount of certified organic gluten in it.”

There are several problems with this statement, including the fact that ALL ingredients in a food product must be listed (including ingredients in the "mother dough") yet none of the ingredients listed are an inherent source of gluten.

Sami's Bakery had a very similar issue with labeling. As a result, they received a warning letter from FDA stating:

"The label declares “Contains Gluten, Wheat, or Yeast.” Under FALCPA, if a “Contains” statement is included on a food label, the statement must identify the names of the food sources for all major food allergens that either are in the food or are contained in ingredients of the food; this would include incidental additives. We question the intent of the use of the term “or” in this “Contains” statement. Furthermore, gluten and yeast are not considered major food allergens. Based on the ingredient list, there does not appear to be any obvious sources of gluten, wheat or yeast ingredients, but based on the gluten analysis, the product appears to contain more than just incidental amounts of gluten. In addition, if gluten or wheat containing ingredient(s) are added ingredients in the manufacturing of the product, the ingredient(s) must be declared as part of the ingredient statement in accordance with 21 CFR 101.4."