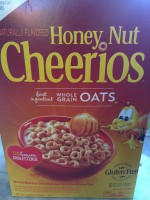 The following report on GF CHEERIOS: COMBINED DATA/SUMMARY STATEMENT will inform you of the amount of gluten found in this product during testing.

Gluten Free Watchdog tested 5 boxes of gluten-free Original Yellow Box Cheerios, 2 boxes of Honey Nut Cheerios, and 1 box of Multi-Grain Cheerios (these boxes are not part of the Cheerios recall). Some boxes of Original Yellow Box Cheerios and Honey Nut Cheerios tested by GFWD are contaminated with low levels of gluten. This contamination varies by box. Gluten contamination within each box of Cheerios is difficult to evenly distribute. This uneven distribution and heterogeneous test results may be due to:

·      The oat flour and/or oat bran used as ingredients in Cheerios containing gluten that is not evenly distributed. This hypothesis is consistent with data shared by General Mills with GFWD (a single sample of oat flour tested by General Mills had widely divergent test results ranging from less than 5 ppm gluten to well over 20 ppm gluten).

·      The highly processed nature of the final product cereal—heat treated and extruded—which may make it difficult to accurately asssess this cereal for gluten.

·      Increased efforts should be made to remove gluten contamination from oats.

·      Increased efforts should be made to homogenize (evenly distribute) any gluten contamination in oat flour.

Gluten Free Watchdog recommends that individuals with celiac disease and other gluten-related disorders not eat gluten-free Cheerios. This position will remain in effect until we are notified by General Mills that:

·      They are testing oat flour and final product Cheerios using the R7001 assay.

·      They are testing individual boxes of Cheerios and not relying on a "lot mean" to determine whether final product Cheerios contain less than 20 ppm gluten (all extractions from all boxes should test below 20 ppm gluten).