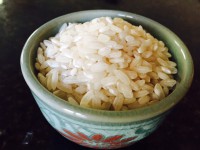 The following report on Mercury/RiceGrain: Combined Data 2018 Update will inform you of the amount of gluten found in this product during testing.

Mercury and the gluten-free diet

UPDATE February 28, 2018: The researchers from Dartmouth College who tested rice products for mercury for Gluten Free Watchdog have just published a new article in the journal Food Chemistry entitled, “Essential micronutrient and toxic trace element concentrations in gluten containing and gluten-free foods” (abstract available at https://www.sciencedirect.com/science/article/pii/S0308814618301341). Among other micronutrients and trace elements, they assessed rice and rice-based products for mercury.

Note: According to the lab, 19 other rice samples were tested for mecury in addition to the samples submitted by Gluten Free Watchdog. All results were similarly low. Please see Complete Test Results for details.

Eat low mercury fish. For a great info graphic from FDA and the EPA seehttps://www.fda.gov/Food/FoodborneIllnessContaminants/Metals/ucm534873.htm