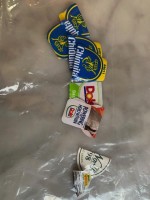 The following report on Produce Stickers (banana, avocado, tomato) will inform you of the amount of gluten found in this product during testing.

At Gluten Free Watchdog we are periodically asked about the stickers on fruits and vegetables and whether the adhesive used on the stickers is gluten-free.

Stickers were removed from purchased bananas, tomatoes, and avocados and placed in a baggie and sent to the lab for testing.

When I spoke to a customer service representative at the US Postal Service, I was told that corn starch is used in stamp production, not wheat starch.

The frequently asked questions page of the website of the Envelope Manufacturers Association states the following:

Is there Gluten in envelope adhesives?
Remoistenable adhesives are derived from corn starch and do not contain wheat or rye gluten.

According to a company representative from the starch biomaterials division of National Starch, corn starch is most often used in the adhesives on stamps, envelopes, and stickers. The representative I contacted was not aware of wheat starch being used in these applications.

According to a company representative, pressure sensitive adhesives (i.e., self-adhesives) are made from synthetic polymers versus starch and therefore do not contain gluten. Adhesives that require moisture, such as lickable stickers and envelopes are made from dextrin. Most of the time the dextrin is corn or potato-based, not wheat-based.